Rarely in life does the arrival of a being prove so captivating that it almost seems to cause time to stand still. In late 1989, the Mazda Miata’s debut was one such incident within the automotive world where clock hands froze in attention for the first of an affordable, fun-to-drive production car. The momentum of the moment has cemented over time into a powerful love affair between the rear-wheel drive compact sports car and drivers who have grabbed hold of its steering wheel. With each vehicle serving as a vessel conveyor of a unique dream, the one-millionth fantasy is now a production reality. On April 22nd, 2016, the roadster’s milestone production example completed assembly at Mazda’s Ujina Plant #1 in Hiroshima, Japan. 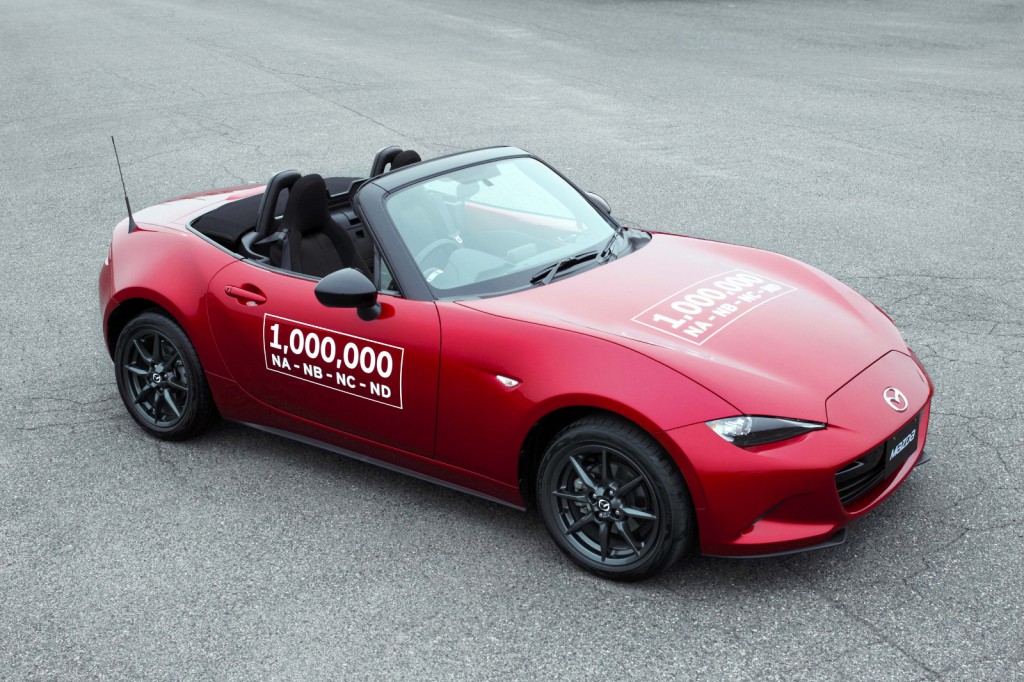 A Seoul Red Premium Metallic colored 2016 model year Mazda MX-5 Miata soft top conforming to Japanese specifications achieves the distinction of being the car that allowed the beloved vehicle to enter into the six-digit figure in production volume. Taking 27 years to reach the production milestone, the car has been known by several names. Simply called the Mazda Roadster in Japan, other regions accept the small sports car as the MX-5. With the debut of the fourth-generation model, Mazda has asserted the MX-5 nameplate as dominant in the United States. However, for many in North America, Mazda’s two-seat, rear-wheel drive compact sports car has long been and continues to be identified as the Miata. This was the name Americans first used to identify the car (said to be derived from an old German word meaning ‘gift’ or ‘reward’). The naming confusion for the Mazda sports car is heightened by the fact it has survived its Japanese auto brand’s several naming philosophies.

Born on the premise of a lightweight, compact sport machine that became so popular during the 1960s and 1970s such as the Triumph TR6, MGB and the original Fiat 124 Sport Spider, the MX-5 has gone through four generations. Today, the Mazda MX-5 Miata is shaped by KODO- Soul of Motion and features the efficiency benefits of SkyActiv technology. Last month, the power-retractable hardtop MX-5 RF made its public debut again showing the vehicle that serves as the essence of a brand has a lot more to share with its sport-loving customers (Many of us would give a standing ovation if a Mazdaspeed version of the fourth-generation sports car is a pending reality).

The impressiveness of the Mazda MX-5 Miata reaching the one-million benchmark is magnified by its existence as a niche vehicle and its resilience against competitors. Over the course of almost three full decades, the Honda S2000 and Pontiac Solstice have all arrived to challenge the MX-5 but have been left in the dust by the enduring Mazda sports car on the assembly line.

All four generations of the Mazda MX-5 Miata have been produced in its current assembly home of Hiroshima, Japan. Commemorating the one-million milestone, the vehicle is being led out on public and fan tours that will start at home with the Hiroshima Flower Festival. The worldwide exhibition of the special car will include a trip to the United States in September. The Miatas at Mazda Raceway, Laguna Seca, at the beginning of October will be the final stop.

There is always a unique amount of romance generated with the introduction of a piece of machinery from an Italian company. In the vast spectrum…

Here we highlight a brand that has revived itself over the last few years – Mazda. Here are summaries of all 2016 Mazda USA models. Enjoy! Mazda3…