For an auto brand who thrills immerses its star badge with prestige and luxury, the G-Wagen has spent 37 years being a boisterous outcast for Mercedes-Benz.

While the SL-Class thrilled the elite with glamorous open top motoring and the S-Class acted as a premium shuttle for VIPs, the four-wheel drive utility vehicle has engaged in some serious, dirty work. Its truck-like ladder-frame chassis and three lockable differentials opened-up radical roads for the German brand to lay tracks in civilian and military roles. Variations of the militarized Mercedes-Benz G-Wagen have been adopted by several nations. Armed forces for Germany, Australia, Canada and even the United States are among a long list of operators of the Mercedes-Benz utility vehicle. Though the Sprinter, Metris and various heavy trucks in Europe live a similar rugged life as the G-Wagen, the vehicle’s utility impression can also be matched by attractiveness as a luxury product. Installed with all the conveniences of a COMAND infotainment solution, Parktronic and a 621-horsepower G65 AMG models in recent years, some in the United States might have not been familiar with how beastly the G-Wagen could be. For 2017, Mercedes-Benz is prepared to give American buyers the means to experience full off-road ferociousness with the G550 4×4. 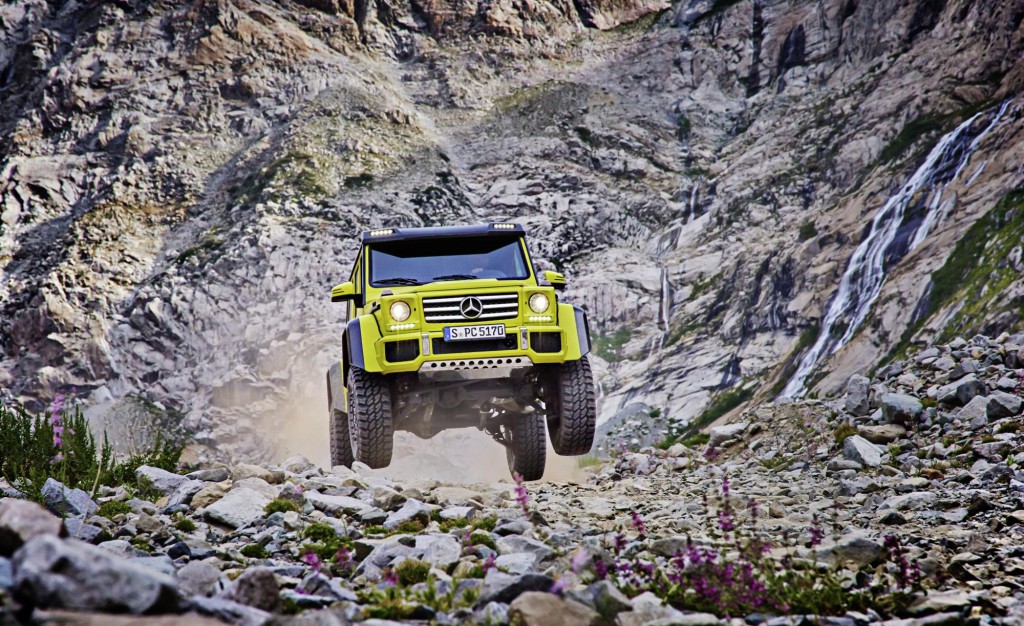 The majority of that increased height is attributed to the added ground clearance made possible with a specialized off-road suspension, portal axles and large diameter tires. An advanced suspension system features dual spring and damper struts to handle various terrains for maximized surface contact. Mercedes-Benz has not yet gone into details regarding the wheel/tire combination offered on the G550 4×4. On the 2015 show vehicle, two sets of wheels and tires were proposed with the 4×4 model. One set is based on 22-inch wheels mounted to 325/55 R tires was advertised as standard while an optional 37-inch MT tires was pitched for serious off-road handling. At 17.2 inches (7.9 inches higher than the conventional G550), the G550 4×4’s additional space above the ground allows for drastically improved off-road performance. A maximum approach angle for the Mercedes-Benz G550 4×4 is rated at 51.6 inches while a maximum departure angle is 43.8 inches (actually besting the Hummer H1).

Influenced by 416 horsepower and 450 pound-feet of torque, the Mercedes-Benz G550 4×4 is channelled through a 7-speed automatic transmission. Similar to the G550 and the AMG versions of the G-Class sport utility vehicle, 2017 Mercedes-Benz G550 4×4 operates with a permanent all-wheel drive system that works in association with three 100-percent locking differentials. The portal axles used on the G550 4×4 not only elevates the vehicle but accomplishes the feat without changing steering components or drive shafts. Portal axles also provide operators of the Mercedes-Benz G550 4×4 the flexibility of adopting different sized tires without the need to reconfigure the vehicle’s speedometer.

Pricing details of the 2017 Mercedes-Benz G550 4×4 have not been revealed to this day. As an estimate, the vehicle should not exceed the $119,900 price of the conventional G550 but should not be greater the G65 AMG. Arriving in early 2017, the G550 4×4 will include the interior luxuries Mercedes-Benz buyers have grown to expect, complete with a standard eight-inch COMAND infotainment system.

Are you a Mercedes Benz fan? Check out some of the coolest custom and classic ones HERE.

It’s no secret that automakers are racing to bring autonomous cars to the market. It appears that Mercedes-Benz is leading the pack. The manufacturer has…