Participating in the United States auto market for two decades, Korean-based Kia has never offered a convertible. In most cases, it’s hard to even envision the appearance of a drop-top Kia (especially at this time of the year as sunlight is growing shorter throughout the day in the northern hemisphere). Leave it up to the 2015 SEMA Show held in the “anything goes” city of Las Vegas to premiere a custom example of the Kia convertible. 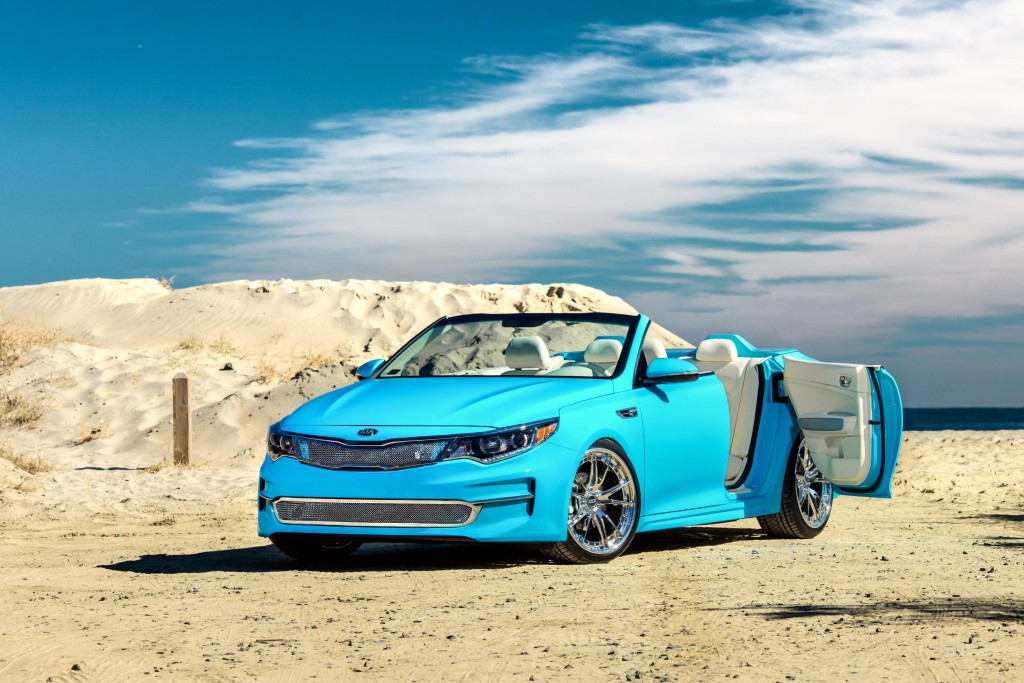 Inspired by the spirit of Florida’s coastal A1A highway, the specially modified 2016 Kia Optima sedan is experimented upon as a custom top-down cruiser ideal for embracing sea air and sun. Allowing the beam of sunlight to fill the cabin, the convertible Optima A1A’s removed roof is accompanied by a shortened windshield giving the vehicle a lower profile appearance. A Ksport coil-over suspension reduces the Optima’s standard ride height while 20-inch wheels provide an additional optical sensation of a ground-hugging four-door roadster. Realizing that a hardtop sedan conversion to an open-top vehicle is not as simply as cutting off the roof, Kia has reinforced the structure of the Optima A1A with disguised steel tubes. Kia’s turbocharged 2.0-liter four-cylinder engine propels the 2015 SEMA Show premiere coupled with a high-performance exhaust system.

Another feature incorporated into the Kia Optima A1A custom convertible is a unique passenger door opening pattern. Resembling the opening manners of the famous Lincoln Continental convertibles of the 1960s, the rear passengers’ doors are hinged to swing towards the back of the custom Optima. Kia describes the rear-hinged doors as an effort to add “whimsy and fun” to the Optima A1A’s presentation.

When doors for front and rear occupants are opened, the Kia Optima A1A’s interior is revealed in full display. Configured to seat four, bucket seats upholstered with soft butter-cream leather is fitted at the front while the second row passengers are divided by an extended armrest.

The Optima A1A was one of four custom cars Kia Motors America presented at the 2015 SEMA Show in Las Vegas this past November. Heading into the 2016 auto show season, we can only wait and see if Kia is open to the idea of a convertible production car.

If you are a Kia fan, check out some cool custom ones HERE.

Nothing quite says passenger comfort on the road like a stretched limousine. Delivering unmatched luxury comfort for rear seat passengers when travelling on four wheels,…