Just looking at the A. Kahn Design Flying Huntsman 6×6 will immediately cause you to forget Earth Day was last week. A modified Land Rover Defender 110, the heavily customized vehicle emphasizes both sport and utility. Alongside four-wheeled vehicles displayed at this past March’s 2016 Geneva International Motor Show, the six-wheeled monster towered above the many individuals in the audience. Thanks to a new agreement with Canadian-based Urban Warrior, it will soon be possible, with the right amount of money in the bank, to preside in control of a street-going version of the mammoth creation on North American roads.

A super-tough-looking, high luxury utility vehicle, the Urban Warrior Flying Huntsman 6×6 is described by Kahn Design as “ . . .  a fitting tribute to one of the world’s best loved vehicles.” Specially coach-built, the six-wheeled vehicle has been extended by 34.646 inches in length over the Land Rover Defender serving as the base for the heavily-modified machine. The truck bed at the rear section of the sport utility is reinforced by dual roll bars. A Volcanic Rock color appearance was used on the Geneva-showcased example. Improvements have also been made in the styling of the front and rear of the Urban Warrior Flying Huntsman 6×6 providing a sporty toughness. 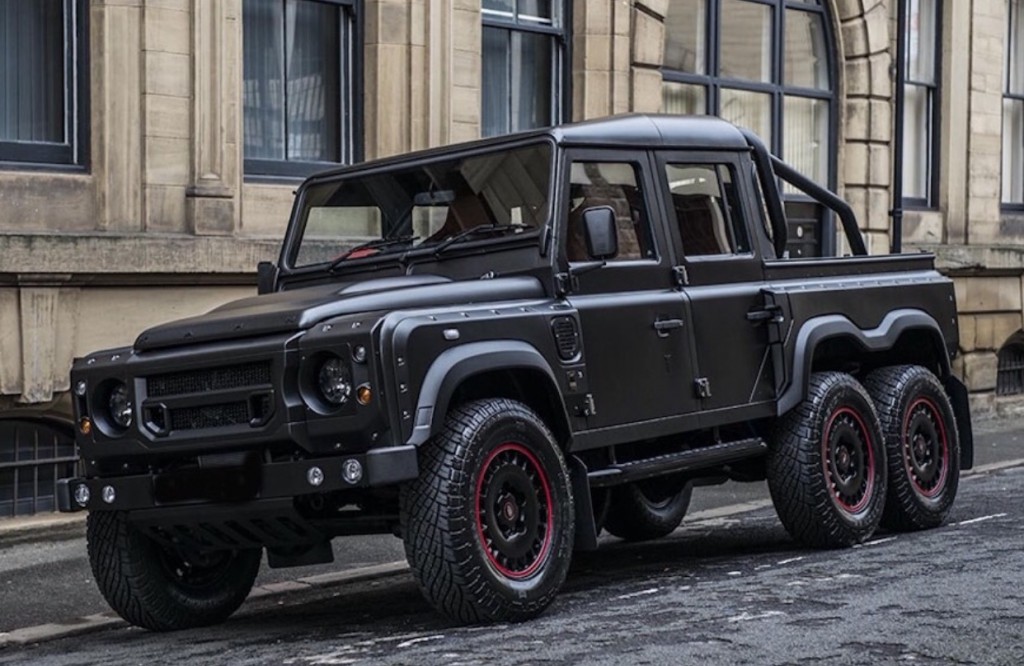 The sport utility vehicle categorization is summed-up in abundance. Utility of six propelled wheels is definitely an exotic manner for conceivability conquering almost any terrain (although a parking lot might be a challenge with its approximate length of more than 220 inches bumper to bumper). The drive system incorporates a shift-on-the-fly transfer case as well as several limited-slip differentials. An upgraded suspension and specialized wheel/tire combination are standard on the Urban Warrior Flying Huntsman 6×6.

Detailing the sport side of the Urban Warrior Flying Huntsman 6×6 is drawn from a supercharged 5.0-liter Ford Coyote V-8 engine replacing the base 2.2-liter diesel powerplant. The forced induction used for the eight-cylinder power unit results in a befittingly tall 670 horsepower worth of momentum. A six-speed automatic transmission is added to best manage the brawny performance muscle.

As expected from an ultra-exclusive creation such as the Urban Warrior Flying Huntsman 6×6 and modern Land Rover stature, the interior undergoes a series of fine-tuning upgrades. Richer carpeting and improving soundproofing are among the first features defining the modified vehicle. Heated and cooled leather-upholstered seating supplied by Recaro as well as a high-tech, Bluetooth-enabled array of items including navigation system and premium sound equipment can also be noted inside the Urban Warrior Flying Huntsman 6×6. Importantly, a rearview camera is installed to permit orderly reversing.

The first Flying Huntsman 6×6 vehicles will be available by the end of the year. Price of the conversion has not been announced. In the United Kingdom, the cost of the vehicle has been assessed at £150,000 (currently equating to roughly $218,400 US).

Are you a Land Rover fan? Check out some cool custom ones HERE.

Debuting to the global automotive public at the 2016 Canadian International AutoShow in Toronto, the Toyota U-squared is an urbanized utility concept combining the aspects of…

For an auto brand who thrills immerses its star badge with prestige and luxury, the G-Wagen has spent 37 years being a boisterous outcast for…

We are starting a series of posts to give you quick but informative summaries of every model available from a vehicle manufacturer in the USA. These…