In the course of over 35 years, BMW’s M performance line has never disappointed the most discriminating speed seekers. Infusing a potent blend of superior driving dynamics and all-out momentum into their already respected range of vehicles, BMW has found a way to improve on the formula. Lately, BMW has realized that adding their letter ‘M’ to a vehicle sometimes just isn’t enough. Such has been the case with the special edition 600-horsepower 30 Jahre M5 sedan’s release this year. For 2016, BMW will treat the M4 road car to a GTS transformation. Encompassing technologies to define a transforming future for performance, the 2016 M4 GTS is a 189.5 miles per hour beast of a Bimmer.

Constructed on the old and new knowledge gained through motorsports, the special edition 2016 BMW M4 GTS is immediately viewed as remarkable. Employing what BMW describes as an intelligent lightweight body structure, the exterior denotes the first signs you are observing something more venomous than a typical M4 coupe. Carbon fiber is extensively applied to the shape of the 2016 BMW M4 GTS recreating the outer mirrors and hood. In the case of the hood, carbon fiber results in a 25 percent weight reduction compared to the traditional aluminum engine cover. The race-track tailored bodywork of the M4 GTS features a lightweight splitter and rear wing also made of carbon fiber.

BMW’s trademark kidney grille (featuring a gloss black treatment) and LED headlights are found as part of a ferocious front end. At the rear, the adjustable wing and diffuser combine to supply aerodynamic stability. The tail section of the 2016 BMW M4 GTS will feature the first application of OLED lighting providing a fully luminescent appearance. Between the front and rear of the BMW M4 GTS is low-stance with massive wheel arches. Forged, machine polished BMW M star-spoke wheels applied with an Acid Orange coloring. 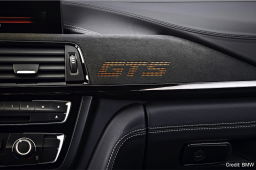 The Acid Orange coloring is also used to accent portions of the M4 GTS’ interior including a perforated ‘GTS’ badge. Alcantara is applied throughout the cabin providing an essential racing touch. Door panels and rear side panels inside the BMW M4 GTS are unique to the vehicle, designed to adhere to a more lightweight sensation. Rear seating is not a priority with the M4 GTS, with a rear glass-fiber reinforced plastic shelf and carbon fiber rear panel in place of where a bench would be found. Another special feature included as part of the 2016 BMW M4 GTS is a fire extinguisher!

Applying many of the same lightweight principles used for the vehicle’s shape, the 2016 BMW M4 GTS’ chassis gains extensive track-purposed engineering intended for the street. An adjustable three-way coil-over suspension system serves as the leading source of the car’s handling. Specially calibrated steering for wider wheels is standard while high-performance carbon ceramic brakes featuring aluminum construction stop the M4 GTS with six-piston calipers at the front and four-piston calipers at the rear. In regards to advanced handling technology, the rear-wheel drive vehicle includes the Active M differential and an upgraded electronic-aided handling assistance, combined with an anti-lock braking system that is both intelligent as well as adaptable.

The 2016 BMW M4 GTS’ engine is the highlight of the special edition performance vehicle. 493 brake horsepower and 442 lb-ft of torque worth of performance is derived from a 2.0-liter BMW TwinPower Turbo six-cylinder engine. The BMW TwinPower Turbo engine dropped into the two-door also adds an extra unique item. The M4 GTS will be the first production car to be fitted with BMW’s Water Injection System. From a refillable 1.3-gallon reservoir, Water Injection System sprays a calculated mist of water into the intake plenum chamber of the BMW M4 GTS’ power unit resulting in cooler engine and turbocharger temperatures as well as knock resistence. BMW claims the use of the cooling technology will improve overall performance and prolong the life of the engine.

Fluid cooling of turbocharged engines is a case of revisiting an old premise. The 1962 Oldsmobile Jetfire, one of the first turbocharged American-built production cars, included a fluid injection component. The so-called Turbo Rocket Fluid was a combination of water and additives. Swedish car company Saab also sold a turbocharged version of their Saab 99 with a water injection system. While intercoolers have largely relegated the ides of water injection out of the auto industry with the increased use of turbocharging through the past decades, BMW’s choice of revisiting the technology for the M4 GTS touts special advantages.

Power from the water-injected BMW TwinPower propelled is channelled through a seven-speed M double-clutch transmission with Drivelogic offering three unique shift programs. Momentum to the rear wheels of the BMW M4 GTS allows the vehicle to storm from 0 to 60 miles per hour in just 3.7 seconds. Top speed is electronically-limited but still allows the M4 GTS to shoot up to 189.5 miles per hour.

In the case of European vehicles, an ongoing frustration of North American driving audiences is being deprived of access to some fantastic Autobahn-roaming performance cars. To the point it almost seems like whining, auto companies have been relenting as proven by the pending arrival of the Ford Focus RS. Luckily this time, 300 of the 700 vehicles being released are destined for the United States.

Are you a BMW fan? Check out some of the coolest custom BMWs HERE.