Some would believe sports car purists have accepted some of the greatest compromises in recent decades. While lightweight construction and turbocharging have entered the mainstream automobile market, the sports car category has accepted new notions detracting from the raw notion of driving a responsive, agile vehicle. Though hybrid technology delivers impressive electric momentum, some drivers miss the sense of an internal combustion engine’s uninterrupted roar. More and more, the traditional manual stick shifter has been minimized in favor of high-gear automatics and dual-clutch transmissions.

In the past two decades, fans of Porsche had to adjust to water-cooled 911 engines, a crossover vehicle, four-door performance car and, most alarmingly, cup-holders. Some concerns have also arisen whether Porsche will continue to offer a conventional manual transmission in their sports car line-up heading into the future. Recently, Porsche has been assuring loyalists their sports car past remains part of the future. The introduction of the 2017 Porsche 718 line-up is one moment of late where the German auto maker has accepted their history as guidance. Debuting at the 2016 Geneva International Motor Show, the Porsche 911 R is sports car purity. 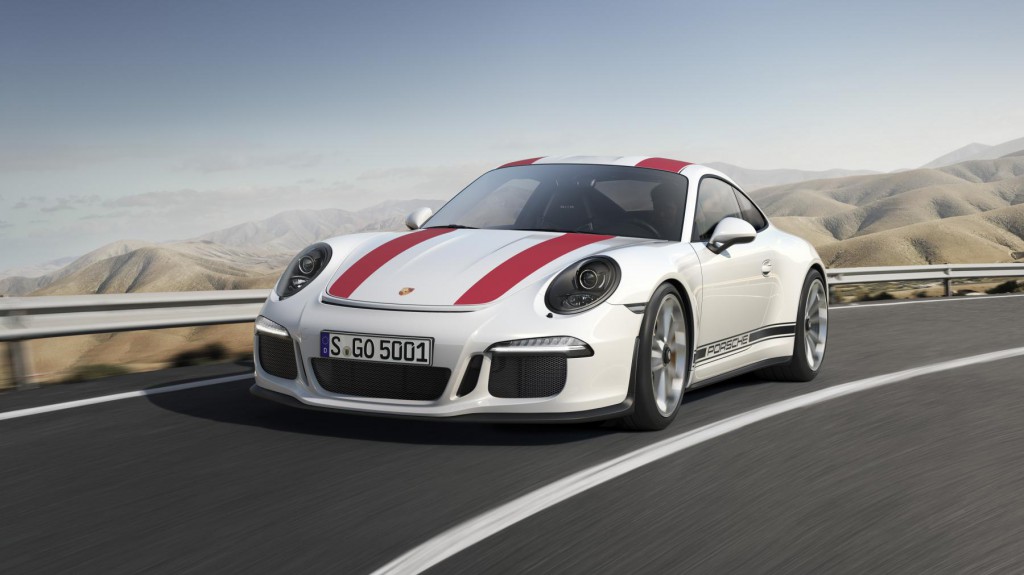 Based on the naturally-aspirated Porsche 911, the 911 R is described as a road-homologated race car. A modern retelling of a race-purposed production car first built in 1967, this newest exercise almost 50 years later is a dedicated, streamlined machine differing from 911 street car conventions. The 2016 Porsche 911 R emphasizes motorsport engineering methods such as weight-reducing modifications and performance-oriented mechanicals.

Accomplishing a lighter weight version of their iconic sports car, Porsche has invested efforts of creating a vehicle 110 pounds lighter than the 911 GT3 RS. The 2016 Porsche 911 R employs carbon fiber fenders and front luggage compartment lid, magnesium roof and the removal of rear seats. Further lightweight principles are used within the interior as well as in the wheels within ultra high performance tires. Finished in matte aluminum, the 20-inch wheels utilize a forged, lightweight construction. Overall, the 2016 Porsche 911 R achieves a total weight of 3,021 pounds. 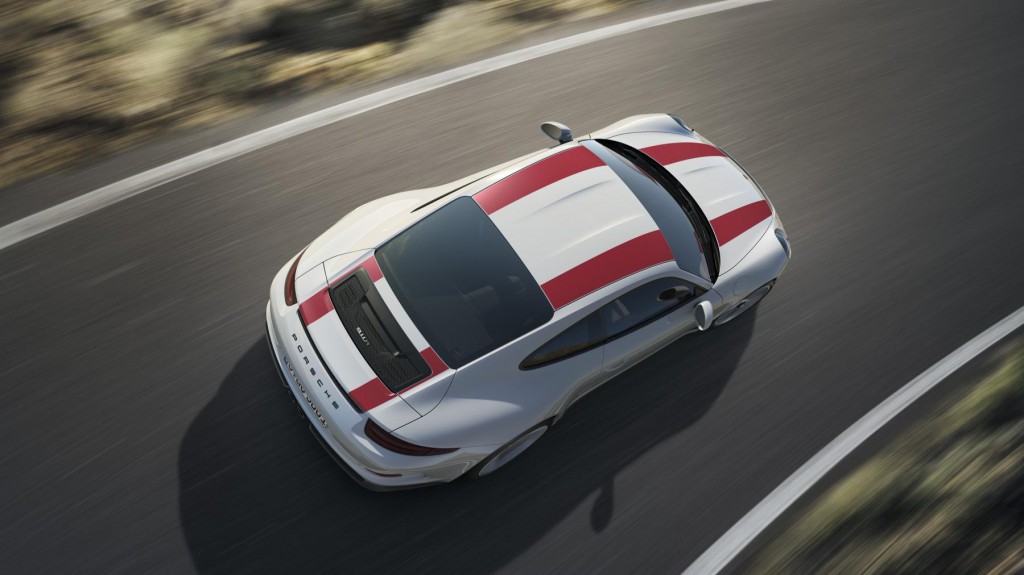 While the Porsche 911 Carrera body shell retains its familiar shape, fans of the brand will instantly distinguish the 911 R. The front and rear bodywork design is borrowed from the 911 GT3. At the front of the Porsche 911 R, a specialized spoiler lip is inspired by the GT3. The Porsche 911 R’s rear incorporates a unique configuration. The 911 Carrera’s automatically deployable rear spoiler and a specially-designed rear diffuser combine to deliver downforce for the Porsche 911 R. Historically significant red or green striping and Porsche logos can be opted on the 911 R for an added racing look. 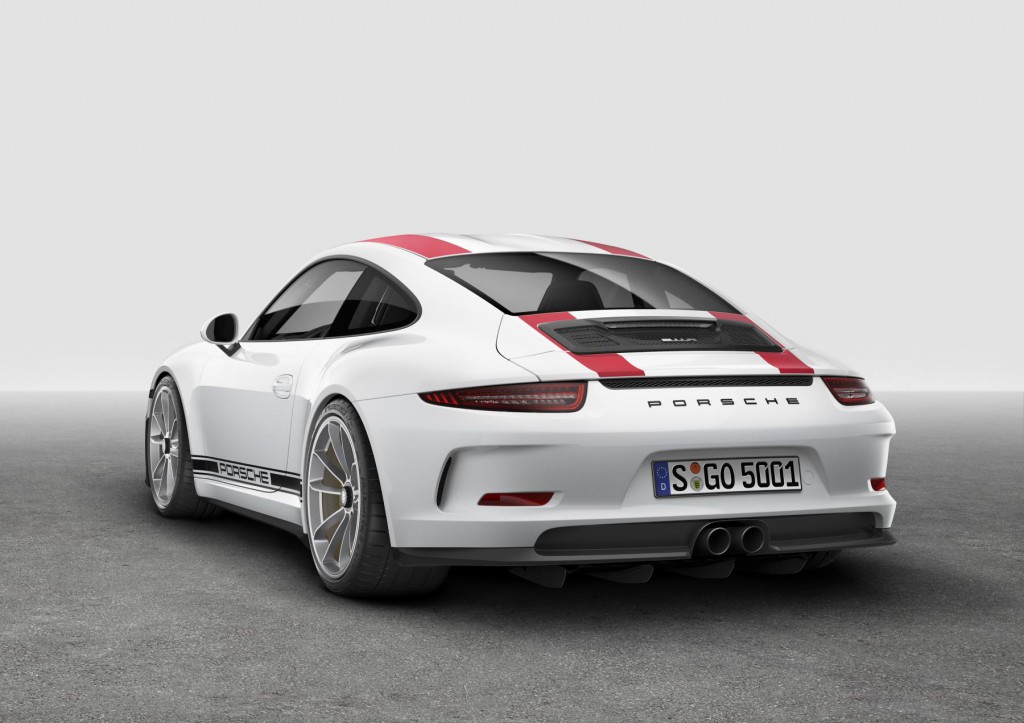 The power source fro the 2016 Porsche 911 R is derived from a 4.0-liter flat-six engine. Without the use of any forced induction system such turbocharging, the six cylinders in the Porsche powerplant combine to generate 500 horsepower. Channelled through a short-ratio, six-speed manual transmission, the delivery of engine muscle is handled entirely by the driver. Capable of accelerating from 0 to 60 miles per hour in 3.7 seconds, the Porsche 911 R can tap out at 200 miles per hour. For a naturally aspirated, flat-six engine, the crossing of the 200-mile per hour plateau is a testament to Porsche’s performance artisanship. Complementing the engine/transmission combination, Porsche Stability Management, Porsche Ceramic Composite Brakes with large diameter rotors and standard rear-axle steering permits optimization of the full extent 911 R sports car. An option available on the Porsche 911 R is a front-axle lift system that can raise or lower the car by 1.2 inches instantly for improved travel during everyday driving.

Grabbing hold of an exclusive 14.1-inch diameter GT sport steering wheel and shortened gearshift lever, the driver of the Porsche 911 R is surrounded by a minimalistic cabin. Purposely configured as a two-seater, the 2016 Porsche 911 R is also intentionally void of any modern sports car amenities. The audio system and air conditioning unit has been deleted from the car as standard features (although they can be equipped at no extra cost if a buyer wishes). Carbon fiber provides a functional and ornamental meaning within the cabin. A treatment referencing interior detailing found inside the original 911 sports cars, a houndstooth pattern is applied within a seating structure also composed of carbon fiber and leather. 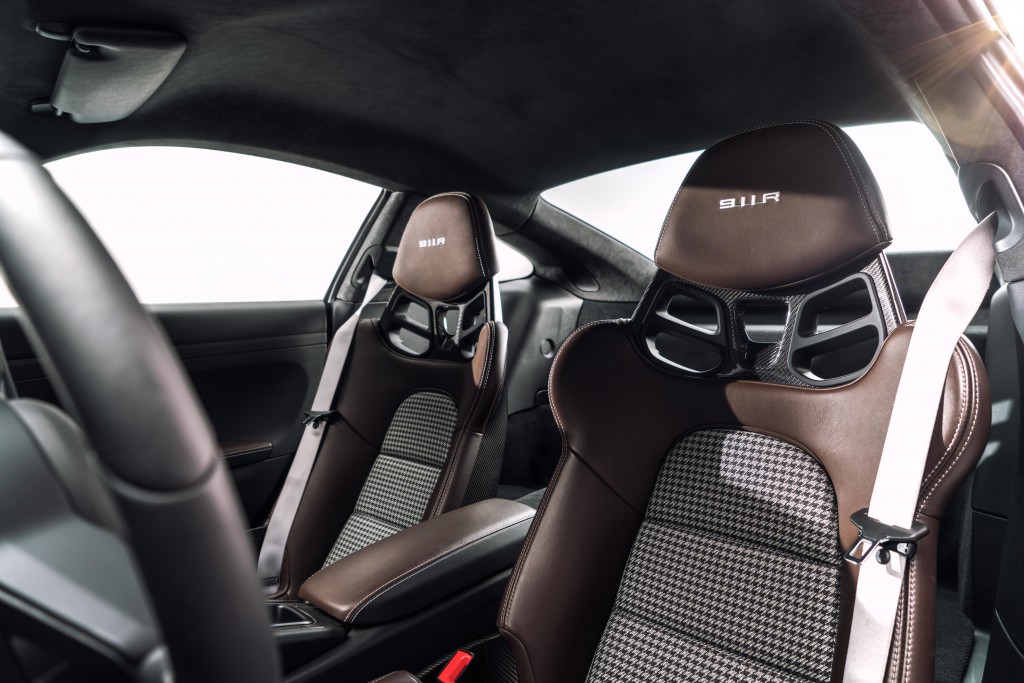 Only 991 examples of the 2016 Porsche 911 R will be built marked individually by an embedded aluminum badge in front of the passenger inside the vehicle. Priced at $184,900 less taxes and delivery costs for the United States, purity does come at a steep cost. With there certain to be 991 buyers wanting to experience race car-like sports car flavor, the first Porsche 911 Rs will reach dealership later in the summertime.

Do you like Porsches? Check out some of the coolest custom ones HERE.