Based in Southern California, Hunter Swift (@hunterswift on Instagram) is an up and coming car photographer that is beginning to get a lot of attention in the car scene. Hunter is an avid car enthusiast and very passionate about cars. He has owned a Pontiac G8, Mitsubishi Evo X, and now drives a Cadillac CTS-V. He chose the CTS-V for its performance and the fact that it has 4 doors and can still fit his 3 kids into the Recaro seats in the rear. His Cadillac has a few performance mods from GevPwr, a D3 carbon fiber hood, an APR Performance GTC-500 wing, Velgen VMB5 Wheels, Eibach Springs, Toyo Tires and green Brembo brakes. 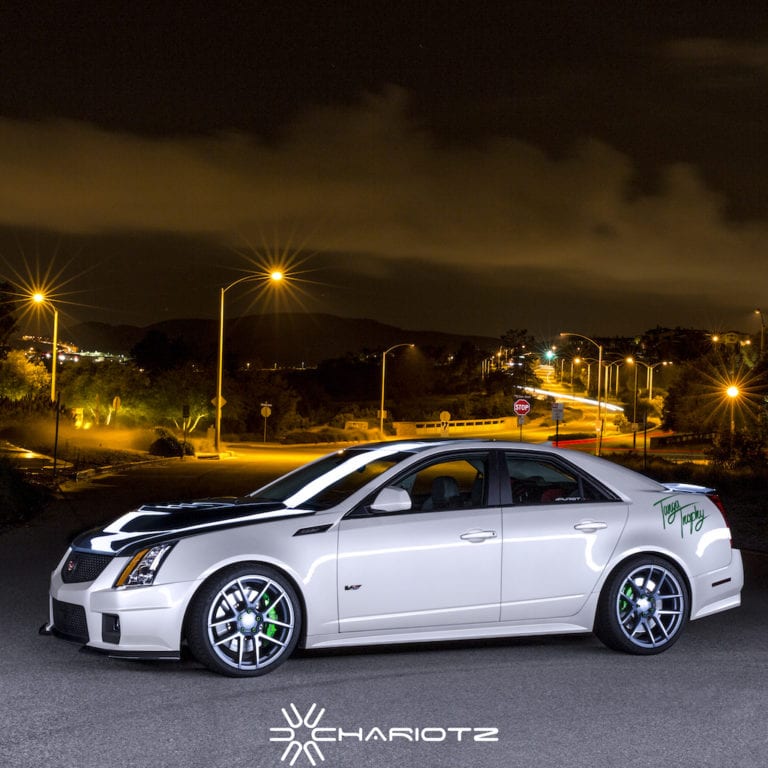 Hunter Swift has been taking car photos for over 5 years and began his photography shooting his own cars. Once he started to shoot other people’s cars he quickly realized that there are already a lot of great photographers in the car scene and that he needed to make his photos a little different.

Hunter believes it is his attention to detail that makes his photos stand out. His post editing in Photoshop removes distractions like leaves, rock chips, reflections and background objects that would otherwise draw your focus away from the car. For every photo he takes, he spends anywhere from 10 minutes to 2 hours editing the photo.

Hunter also specializes in a night photography technique called “light painting” which consists of 30-second exposure shots in the dark. While the lens is open Hunter walks around the car “painting” the car with light. Hunter has developed his technique from just shining light on the car to using the reflection of the light and shadows to accent the car’s shape and design.

Hunter also drives with his camera and has taken some of the best “rolling shots” while driving. He shoots with the Canon 6D and mostly the 24-70 2.8L ii lens. Although Hunter’s photography is very impressive, he is still not satisfied and believes that over time he will only improve his techniques, skills and equipment to deliver even better photos. Hunter Swift has been shooting exclusively for CHARIOTZ since June 2015 and can usually be found at the local Southern California car shows, meets, and rallies.

A must-have tool to market your automotive business is Instagram. It allows yourself, and your products and projects, to be showcased on what has become the…

If you didn’t make it to Bimmerfest 2015 at the Fontana Auto Club Speedway in Fontana, CA this past weekend, you can view our album…

You have spent hard-earned dollars and countless hours to get your car to look and drive like it does. And now you want to show…