The saying “All good things must come to an end” is a tragic truth. How many times in our lifetime have we wished that something great could last a little longer? At the end of this year, the auto world bids goodbye to Mitsubishi’s Lancer Evolution. The precision-built, high-performance compact sedan has approached the finish line of what has been 10 generations of turbocharged, all-wheel drive muscle. A firm speed demon on the streets, the Lancer Evolution’s name has been a tour de force in rally car competition across the globe for two decades. Mitsubishi’s hay-day with the model was in the WRC (World Rally Championship) in the 1990s with versions of the Lancer Evolution driven by Tommi Makinen. In 1998, Makinen along with his teammate, the late Richard Burns, successfully fought off Subaru, Toyota and Ford for the WRC constructor’s title.

Retiring the Lancer Evolution in 2015 in order to focus on more economy-oriented machines, Mitsubishi has mercifully chosen to pay tribute to their legendary sport vehicle. In addition to a 1,000-vehicle Final Edition release planned for the Mitsubishi Lancer Evolution’s homeland of Japan, a newly-announced wind-down of the model will include 1,600 destined for the United States. 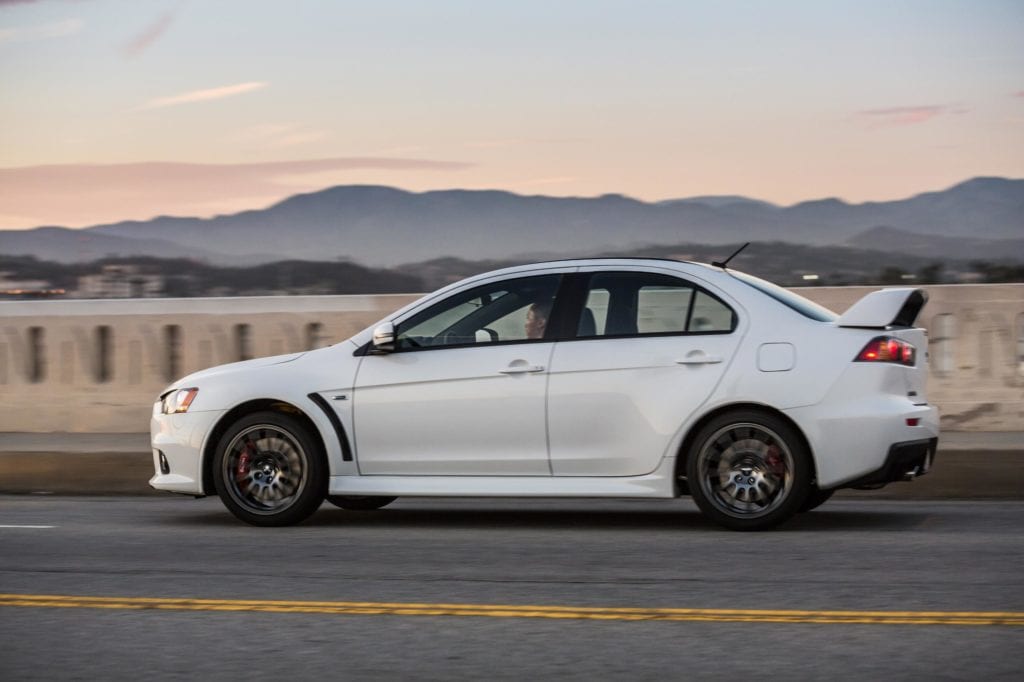 Based on the top-rated GSR trim level, the 2015 Mitsubishi Lancer Evolution Final Edition is a specially-marked version of the energetic little four-door sedan. Each one of the 1,600 Final Edition vehicles is individually numbered and offers unique equipment not commonly found on the Lancer Evolution GSR model. The most boastful eye-catching details of the Final Edition are found under the hood. Powered by a 303-horsepower, 2.0-liter turbocharged and intercooled dual overhead cam engine, the 2015 Lancer Evolution Final Edition will depart as the most potent version of the sport compact ever sold in the United States (versions of the Lancer Evolution sold in Europe have generated up to 440 horsepower). With 12 extra horsepower on tap compared to the traditional 2015 GSR, the sizzling performance is drawn through a five-speed manual transmission through the Super All-Wheel Control system.

Accompanying the performance boost of the 2015 Lancer Evolution Final Edition is an aggressively-tuned chassis. Bilstein shocks and Eibach springs provide a meaningful sport ride quality only some speed-tuned compacts could envy. Braking for the limited edition Mitsubishi sport compact is upgraded at the front with a lightweight set of two-piece Brembo rotors serving as an excellent counter to the 303 horsepower as well as 305 lb-ft of torque on tap.

Mated with the Final Edition’s added velocity potential, Mitsubishi has also given the 1,600 last American examples of the sport compact special exterior and interior styling traits. Exterior touches provided for the Lancer Evolution Final Edition will include unique badging at the rear, black-painted aluminum roof, as well as a gross black treatment to the front center bumper and hood air outlet. Dark chrome is also used to accent the front grille surround in addition to the Enkel alloy wheels. Pearl White, Rally Red, Mercury Gray and Octane Blue body colors are primary paint options of the 2015 Mitsubishi Lancer Evolution Final Edition. A black interior includes the use of red accent stitching along the sport seats, steering wheel, e-brake handle as well as other areas such as the floor mats. Within the center console is a plaque individually identifying each of the 1,600 Final Edition models. 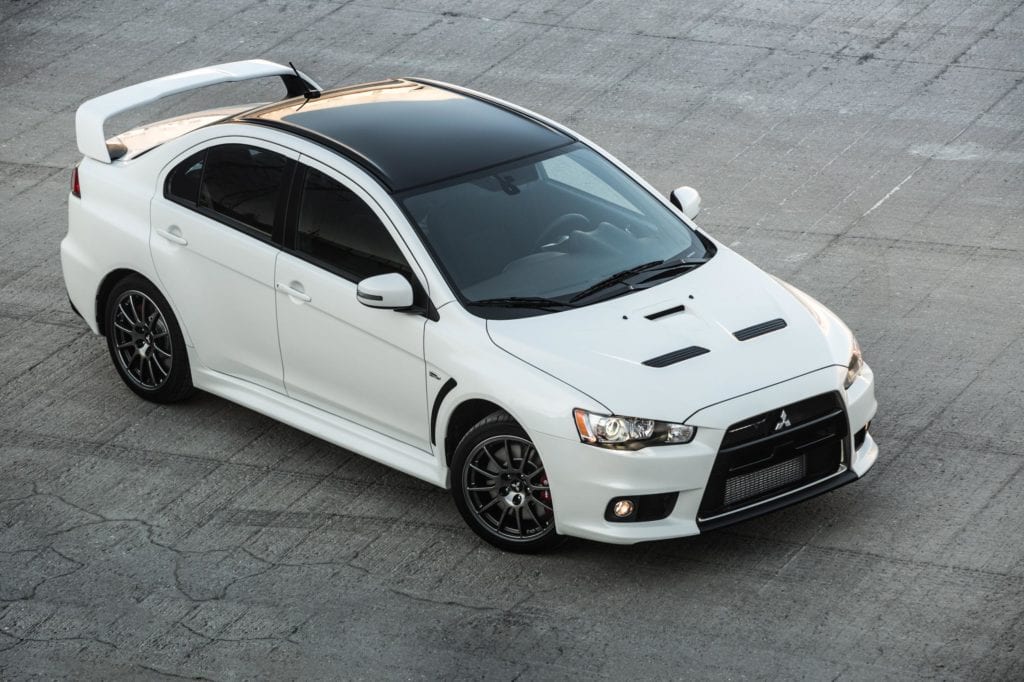 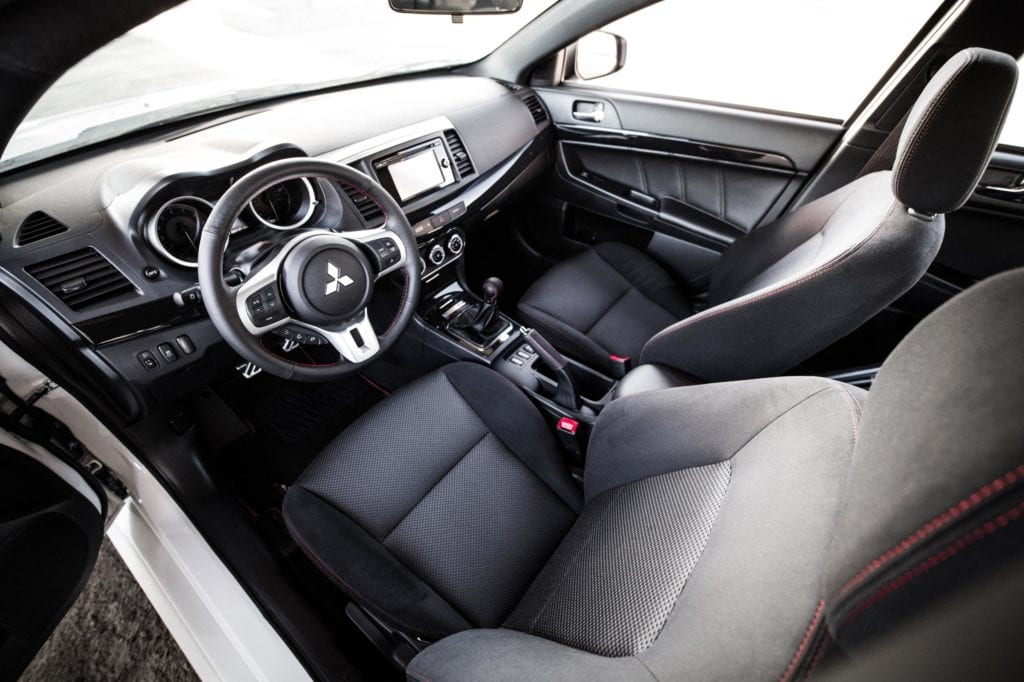 Serving as a ceremonious end to the evolutions of the Mitsubishi Lancer Evolution, the 2015 Final Edition model will retail for $37,995. As the auto company evolves, maybe in the not so distant future, Mitsubishi will re-establish its ties to compact performance.

Check out our collection of custom Evos and other Mitsubishi cars HERE.